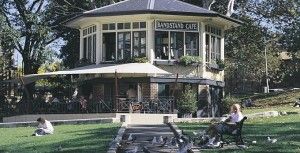 One of Sydney’s first and most densely populated suburbs, Darlinghurst has always been in the headlines.

The land was first granted to John Palmer, who arrived in Australia on the First Fleet, and the suburb was initially named Henrietta Town after Governor Macquarie’s wife. In 1831 his successor, Governor Darling, changed it to Darlinghurst, after his own wife.

Darlinghurst was home to the colony’s wealthiest, with 17 extravagant white villas lining the the hill down to Woolloomooloo, owned by residents like NSW Surveyor- General Sir Thomas Mitchell and David Scott Mitchell, benefactor to the Mitchell Library. By the 1840s these large blocks were subdivided, high-density building began and Darlinghurst Gaol was built on Forbes Street.

Oxford Street had become a busy commercial centre by the late 1800s and many of the historic buildings lining it today were built during this time. Oxford Street’s profile began to decline after the 1950s, but its popularity with Sydney’s gay community and the building boom at the western end of the street ensured its revival.

Around half of Darlinghurst’s residents live in apartments, around a third live in terraces and the remainder live in a small number of houses.

Oxford Street features homewares and music stores and is a popular clothes shopping strip for men, while Crown Street has a mix of second-hand clothing stores. South Dowling Street features young designer boutiques and the northern end of Victoria Street also has a strip of one-off and boutique chains.

City Gym on Crown Street is a local institution that has been operating for over 25 years. It was the first gym in Australia to hold aerobics classes and is open 24 hours, seven days a week.

Culture and the arts

Oxford Street is home to one of the world’s biggest celebrations of gay culture, the annual Mardi Gras festival, which takes over the main strip each March with more than 130 floats and over 300,000 spectators. There are also around seven privately owned art galleries in Darlinghurst.

Sydney’s first permanent prison, Darlinghurst Gaol, was designed by colonial architect Francis Greenway to overlook Sydney as a constant reminder that it was a convictown. Its stone blocks were shaped by convict hands and their inscriptions can still be seen on the gaol’s eastern and southern walls. The adjoining courthouse facing Taylor Square opened in 1842 and still operates today. The colonial architect Edmund Blacket designed St John’s Anglican Church on Darlinghurst Road, which is the finest example of a Gothic revival parish church in Australia. There are also many heritage facades between Whitlam Square and Taylor Square, and the Bourke Street Police Station and Darlinghurst Fire Station are both classified by the National Trust.

Celebrity spotting is a popular pastime in Darlinghurst, as it’s home to many famous actors and musicians. The historic mansion Iona is the workplace of costume designer Catherine Martin and director Baz Luhrmann, famous for films like Strictly Ballroom and Moulin Rouge. Harry Seidler’s Horizon Apartments are Sydney’s A-list address of choice.

There’s almost every type of food available on Oxford and Crown streets with fast, cheap restaurants and takeaways serving Thai, pizza, Turkish, soups, Chinese, Vietnamese, Greek and seafood that are open well into the night. Victoria Street is another food hot spot with the legendary vegetarian restaurant and theatre, Govindas, German delights at Una’s and delicious Chinese at Fu Manchu. You can find fabulous coffee at Bar Coluzzi and Tropicana, the original home of the Tropfest short film festival. Many of Sydney’s coolest bars and nightclubs are in Darlinghurst.

East Sydney High School is on William Street, while the prestigious SCEGGS Darlinghurst is on Forbes Street and Sydney Grammar School is on College Street.

Transport and distance from the CBD

This is about as close to the city as it gets – only 1.5 kilometres east of the CBD. There are numerous buses running up Oxford Street to Sydney’s eastern and southern beachside suburbs.